The State of Sliders & How to Make Them Interactive On HubSpot

When introduced, sliders and carousels became hot web properties a few years ago and it was hard to find a website without some kind of sliding or rotating images, specifically on the homepage. Though they receive lot of flak, sliders are still managing to fascinate marketers owing to their ability to show multiple visual media content that is displayed at a single place. It gives them ample scope to promote offers and display interactive content including videos. So, why exactly are sliders receiving negative reviews? Are they really a bygone trend or are marketers still crazy about them. HubMonks studied the report given by Mobify and figured out that there are some myths that have been shockingly busted.

The Common Myths About Sliders/Carousels Busted By Mobify

Answer: High rate of interaction has been noticed for image gallery carousel. 72% of users advance the carousel once. Direct interaction by zooming is done by 23% of users.

Myth 2: People only interact with the first slide.

Answer: Product image gallery carousels get direct interaction from people at a rate of 15.7%. At least 64% of people advance to the third slide.

Myth 3: Automatic advancement of carousels is bad for users

A HubSpot website is power-packed with advanced features both for marketers and developers. HubSpot’s COS/CMS platform includes a responsive Image Slider module that can be added to any live COS/CMS page. Though HubSpot is limited in interactive support, it still allows combining design and functionality in order to make the sliders interactive and helping the marketer to successfully capture user attention and further the user engagement could rise.

Does HubSpot Provide The Most Commonly Used Sliders?

Let’s see if HubSpot is able to fulfil all the requirements of a modern day slider. Which are the most common forms of slider? Presently, there are 16 top slider variations that you come across commonly:

A slider in HubSpot is capable of producing all the above mentioned variations.

What Interactivity Features Do You Get With The HubSpot COS/CMS Slider?

HubSpot is constantly evolving the COS/CMS platform to overcome the limitations and add more interactivity options for the developers. In the interim, developers could customize the components with code editor and utilize third-party plugins to add a desired interactivity to sliders and various other components of the web page. Developers could also access thousands of sliders that are available on the web.

At HubMonks, we are constantly adding interactivity to sliders and various other components across all our projects. In addition to our key findings mentioned above there are several other limitations in interactivity that we have overcome in order to provide an edge to the marketers and help them display their content efficiently. 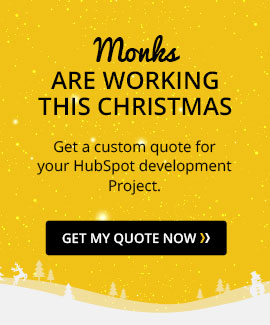 GET A FREE INBOUND MARKETING AUDIT FROM MONKS

Want to know how to optimize your website to get more traffic and leads? Ask our certified inbound marketing specialist for a free one time assessment.